Campus pastors who never lead up will always hit a ceiling in their development.

Refusing to lead up can either be seen as a lack of competence or a lack of care.

When you always seem to agree with those who are leading you, this is often viewed as a lack of knowledge or skill. After all, there’s no way that your boss can be more competent than you in every area, especially if you’re hired to be a specialist in a particular area. For example, how would you feel if you always knew more about children’s ministry than your children’s director? It’s one thing if you were more of an expert in their area when they started on your staff (this is referring to S1 in Situational Leadership, as we addressed in the previous post), but you wouldn’t want them to stay there.

In addition, repeated silence or unconditional agreement is typically interpreted as a lack of initiative or a lack of care. After all, if you truly cared about the project or the task at hand, wouldn’t you have been thinking about it, researching it, and trying to bring your best ideas to the table?

Now don’t misinterpret me. I’m not saying that you always need to have something to say, nor that you should play the devil’s advocate. There’s definitely a balance needed here, but what’s not an option is repeated silence.

When you do speak out and try to lead up, this can either be seen as a challenge to authority, or allegiance to the organization.

Let me explain. If those leading you are authoritarian and have big egos, they typically see ideas other than theirs as sub-par, and as a result, a challenge to their authority. When team members speak up, leaders like those are typically thinking, “How dare you say something other than yes? Do you really think you’re better at this than I am?” Or, if the presented idea is actually better than theirs, they will probably find a way to minimize it, and then secretly implement it, while taking all the credit. If that’s how the leadership is at your church, then consider asking the Lord for an opportunity to leave. This is not a healthy environment to be in.

When you present a better idea, alternative solution, or even initiate a brand new idea, you need to think about the way you present it, as much as the content of it.

After all, the fate of your idea, and the fate of your future in the church, ultimately depends on your level of emotional intelligence, how you present the idea, and the amount of relational capital and trust that you have built with others. This reminds me of that often repeated phrase in relationships, “It’s not what you said, it’s how you said it!”

So instead of saying, “No, I don’t like that. I have a better idea. Listen up!” Next time you have a better solution than the one that the lead pastor presents, try saying something like this. “I love __________ (find an aspect of the leader’s idea that you appreciate). What do you think if we did this as well? __________ (present your idea).” Or, if your idea is completely different than what has already been presented, then try this, “I have an idea that’s pretty different than what’s been suggested, but I think it might work, or at least aspects of it. Do you guys want to hear it?”

When you lead up, you are demonstrating your leadership capacity and competency, while also declaring your your love and allegiance to the vision and mission that your church is trying to accomplish.

Here are four areas that campus pastors NEED to lead up in:

Effective multisite churches coordinate preaching across their campuses. If you consider yourself a multisite church, but aren’t doing this, then you’re missing out. More than a common budget and a vision statement, it’s coordinated preaching that keeps multisite churches together and in unison. Whether you do this via video, or with a live teaching team, it’s important that every campus is hearing the same core set of points on a weekly basis. There is definitely room for Campus Sundays where the campus pastors are preaching unique messages to their campuses, but this is more of an exception than the norm.

So how do campus pastors lead up in this area? Well, depending on your church, you may or may not have the opportunity to speak into the sermon calendar. If not, then you need to fight for it, but do this with tact. Don’t demand that you be heard, rather schedule a conversation with the lead preaching pastor or teaching team and ask them how they decide what to preach on. Then, sometime in the conversation, share about some of the unique needs of your campus, and ask if they might be able to keep those needs in mind or even design a sermon series around similar needs. Try doing this on a quarterly basis to keep your campus on the forefront of their planning. The goal isn’t for you to join the teaching team. The goal is for you to help inform them.

If you do have the opportunity to speak into the sermon calendar, then get up and dance. Be an active participant of those meetings and bring new ideas to the table. Bring your pastoral perspective and needs from your campus into those meetings.

When you start as a campus pastor, you need to be clear on what decisions are yours to make and what aren’t. This is what we call decision rites. The clearer you are on where your line of authority lies, the better you’ll be able to both lead down and lead up. Every role in your church will have a different line of authority in this upside down triangle. For example, the Lead Pastor’s line of authority will be close to the bottom of this triangle, so that he is focusing on setting the strategic, while allowing his staff and volunteer leaders to determine the tactical.

He’ll still be able to inform the tactical, but the line of authority merely demonstrates that he needs to focus on the portion of the triangle that is largest for him—the strategic. Contrast this to the small group leader’s line of authority. For him, the line will most likely be close to the top of the triangle demonstrating that the majority of his decisions are going to be tactical, while leaving the strategic decisions to the small group coordinator, director, or pastor. 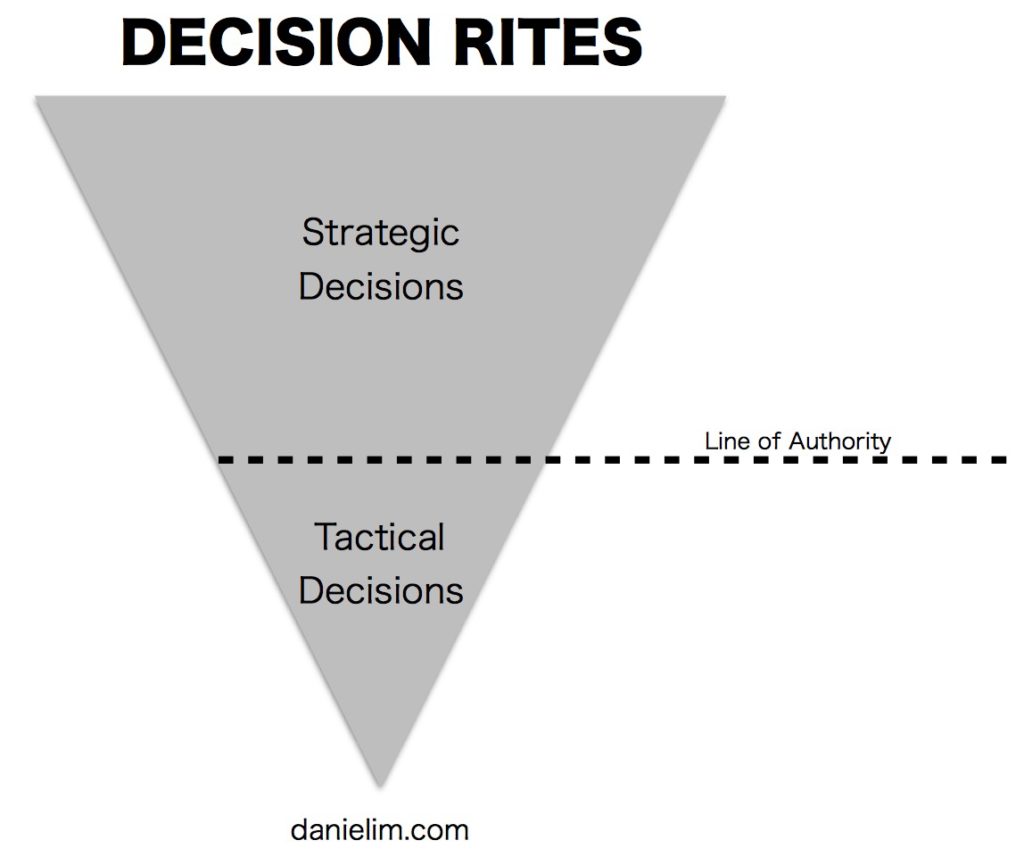 For the campus pastor, your line of authority will most likely be somewhere around the middle of the triangle. Half of your world will be in the strategic and half will be in the tactical day-to-day decisions affecting your campus. Now obviously, this will be different for every multisite church, largely depending on size and strategy, but it’s safe to say that campus pastors will have to make both strategic and tactical decisions all the time.

So in order to lead up, make sure that you’re constantly reevaluating your decision rites with your supervisor. Push for clarity. If you don’t get it, then just make the decisions that you need to make in order to move your campus forward. If you overstep your boundaries, then your supervisor will have a conversation with you. If not, then you’ve just gotten one step closer to defining that line of authority.

While you might be setting the overall direction of your campus, are you speaking into the overall direction of the church? This is how strategic planning typically goes. The elders/leadership team/executive team/lead pastor will set the Strategic Ends (SE) for the church. These are high level strategic goals that take the entire church into consideration. Then, campuses, ministry directors, and teams will create the Key Result Areas (KRA) that will flesh out the Strategic Ends, and move them from dreams into reality.

If you’re at the table, don’t just speak on behalf of your campus. This is a strategic global conversation, so put your global hat on and be an advocate for the entire church and other ministry areas. If all you do is speak about your campus, then you don’t deserve a seat at this table. You’re still thinking largely in the tactical realm.

This last example is short and sweet. Lead your campus staff the way that you think all the staff should be led. Set the example, and don’t inherit dysfunctions from above or from other campuses. Share examples and success stories with your supervisor as you do this. You might be surprised as you do this. Some of your best ideas will probably trickle throughout the organization.

Leading up is more about tact, than it is about strategy. It is more about the way you do it, than how you do it. It’s more art, than science. So brush up on your soft skills, grow in your emotional intelligence, and build up chips in your pocket. Successfully Contextualizing in a Multisite Church

The multisite model would do well to take some pointers from Costco. The Distinctions of Networked, Family, and Multisite Churches

Drew Hyun explains the differences between a networked church, a family of churches, and a multisite church in terms of structure. If your church is growing faster than the community you’re currently in, we need your church to multiply what is happening there. To live a good life in bivocational ministry, you must have an aptitude in six key areas.